It’s been quite a long time since I did a series of mini-reviews, but you might see more of these as I am not having the easiest time writing reviews these days. Today I have a couple of middle grade reviews for you, both are sequels and both are by Latinx authors. If you haven’t checked out these series, I highly recommend them. They are a lot of fun and perfect for those looking for books that will uplift you. 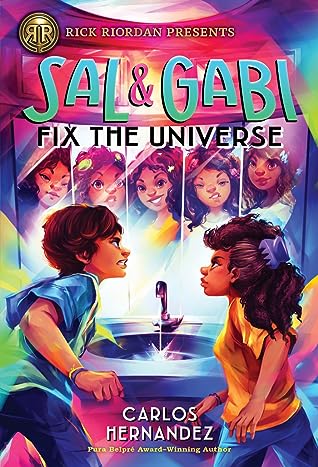 “Best-selling author Rick Riordan presents the sequel to the critically acclaimed Sal and Gabi Break the Universe, a brilliant sci-fi romp with Cuban influence. Among many other challenges, Sal and Gabi have to try to make everything right with our world when there is a rogue Gabi from another universe running loose.
Sal Vidón doesn’t want to live a Mami-free life. Pulling different versions of his mother from other universes is how he copes with missing his own, who died years ago. But Sal’s father, a calamity physicist, is trying to shut down all the wormholes Sal creates, because Papi thinks they are eroding the very fabric of our world. All of Papi’s efforts are in vain, however, because a Gabi from another universe has gone rogue and is popping up all over the place, seeking revenge for the fact that her world has been destroyed. While Sal and Gabi work together to keep both Papi and Rogue Gabi under control, they also have to solve the mystery of Yasmany, who has gone missing from school. Could it have something to do with the wormhole in the back of his locker?
Readers who enjoyed Sal and Gabi Break the Universe will relish being back in the world of Culeco Academy and the Coral Castle along with such unforgettable characters as American Stepmom, the Gabi-Dads, Principal Torres, and the sassy entropy sweeper. With multiple Sals and Gabis in charge, it’s no wonder this sequel offers even more hilarious weirdness and love than the first book.”

Carlos Hernandez once again delivers a hilarious and heartfelt story with Sal & Gabi Fix the Universe, sequel in his SFF Middle Grade Sal & Gabi series. These books provide a much needed sensitive boy protagonist in Sal Vidón. One of the reasons I’ve loved this series so much is because of how vulnerable this kid is allowed to be. He makes mistakes, learns to verbalize his grief, and also learns what it means to take personal responsibility for his actions. I wish all adults could be just as supportive as the ones written by Hernandez. They are always understanding, yet firm, helpful, but never overbearing. Gabi remains the most relatable to this reformed know-it-all child (slightly reformed?). I love how determined and ambitious she is. She is always in someone’s business with the very best intentions (mostly). I loved that Hernandez shows the value of found family and how these bonds can be just as powerful as the ones you are born into. Sal & Gabi Fix the Universe was just as much fun as its predessor while also expanding the Sal & Gabi multiverse. Please tell me there is a chance for more novels because I am not ready to say goodbye to these characters. 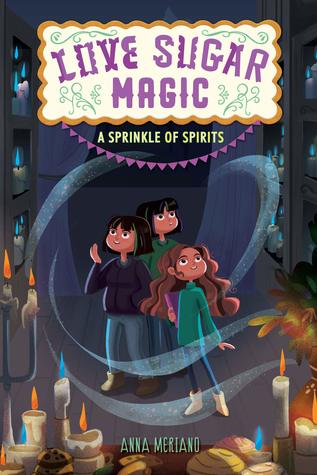 “Leonora Logroño has finally been introduced to her familys bakery bruja magicbut that doesnt mean everything is all sugar and spice. Her special power hasnt shown up yet, her family still wont let her perform her own spells, and they now act rude every time Caroline comes by to help Leo with her magic training.
She knows that the family magic should be kept secret, but Caroline is her best friend, and she’s been feeling lonely ever since her mom passed away. Why should Leo have to choose between being a good bruja and a good friend?
In the midst of her confusion, Leo wakes up one morning to a startling sight: her dead grandmother, standing in her room, looking as alive as she ever was. Both Leo and her abuela realize this might mean trouble—especially once they discover that Abuela isn’t the only person in town who has been pulled back to life from the other side.
Spirits are popping up all over town, causing all sorts of trouble! Is this Leo’s fault? And can she reverse the spell before it’s too late?”

Anna Meriano’s A Sprinkle of Spirits is charming from start to finish. In A Dash of Trouble, Leo discovers that the women in her family are brujas and magic is one of the secret ingredients they use in their family bakery. In this sequel, Leo learns how to balance friendship and responsibility. Her training has taken up a lot of her time and as a result her friendship with her best friend Caroline has suffered. She doesn’t want to choose between Caroline and becoming the best bruja she can be, but she isn’t sure if she really has a choice. Leo’s older sisters, Isabel and Marisol, have taken opposite views, giving Leo conflicting advice on how to balance being a brujas and a “normal” girl. This, of course, confuses Leo even further. I love that Leo isn’t the only Logroño daughter who learns valuable lessons as its important for younger kids to recognize that everyone is still learning how to move in the world. I listened to the audiobook of this one narrated by the talented Kyla Garcia. She brings every character to life, lending a different voice to each character and at times it felt like a full cast recording. The second novel in the Love Sugar Magic series solidifies this MG as a must read for those looking to celebrate friendship, family, and a little magical mischief.

“Two time-traveling agents from warring futures, working their way through the past, begin to exchange letters—and fall in love in this thrilling and romantic book from award-winning authors Amal-El Mohtar and Max Gladstone.
Among the ashes of a dying world, an agent of the Commandant finds a letter. It reads: Burn before reading.
Thus begins an unlikely correspondence between two rival agents hellbent on securing the best possible future for their warring factions. Now, what began as a taunt, a battlefield boast, grows into something more. Something epic. Something romantic. Something that could change the past and the future.
Except the discovery of their bond would mean death for each of them. There’s still a war going on, after all. And someone has to win that war. That’s how war works. Right?
Cowritten by two beloved and award-winning sci-fi writers, This Is How You Lose the Time War is an epic love story spanning time and space.”

“Red wrote too much too fast. Her pen had a heart inside, and the nib was a wound in the vein. She stained the page with herself. She sometimes forgets what she wrote, save that it was true, and the writing hurt.”

“How did a raw chicken get inside Yasmany’s locker?
When Sal Vidon meets Gabi Real for the first time, it isn’t under the best of circumstances. Sal is in the principal’s office for the third time in three days, and it’s still the first week of school. Gabi, student council president and editor of the school paper, is there to support her friend Yasmany, who just picked a fight with Sal. She is determined to prove that somehow, Sal planted a raw chicken in Yasmany’s locker, even though nobody saw him do it and the bloody poultry has since mysteriously disappeared.
Sal prides himself on being an excellent magician, but for this sleight of hand, he relied on a talent no one would guess . . . except maybe Gabi, whose sharp eyes never miss a trick. When Gabi learns that he’s capable of conjuring things much bigger than a chicken–including his dead mother–and she takes it all in stride, Sal knows that she is someone he can work with. There’s only one slight problem: their manipulation of time and space could put the entire universe at risk.
A sassy entropy sweeper, a documentary about wedgies, a principal who wears a Venetian bauta mask, and heaping platefuls of Cuban food are just some of the delights that await in this mind-blowing novel gift-wrapped in love and laughter.”

“The entire back of the locker had become a portal into another world. I could see across dimensions into a whole new reality. Who knew what bizarre aliens lived there, what strange lived they led, what mind-blowing powers and technology they had?”

Carlos Hernandez’s Sal and Gabi Break the Universe is a fun middle grade SFF novel with charming characters who always manage to get themselves in the best kind of trouble. I cannot wait to read the sequel.

“Empress
With a revolution brewing, Rhee is faced with a choice: make a deal with her enemy, Nero, or denounce him and risk losing her crown.
Fugitive
Framed assassin Alyosha has one goal in mind: kill Nero. But to get his revenge, Aly may have to travel back to the very place he thought he’d left forever—home.
Princess
Kara knows that a single piece of technology located on the uninhabitable planet Wraeta may be the key to remembering—and erasing—the princess she once was.
Madman
Villainous media star Nero is out for blood, and he’ll go to any means necessary to control the galaxy.
Vicious politics and high-stakes action culminate in an epic showdown that will determine the fate of the universe.”

Rhoda Belleza’s Blood of a Thousand Stars is an exciting end to her criminally underrated Empress of a Thousand Skies duology that functions both as social commentary and an engaging science-fiction romp.