“There’s no need to ever get up at dawn,” Angela told her. “Not even to shoot joggers. We’re going to leave my brother behind, Kami; he is one of life’s born saunterers.”

“He knows his way home,” Kami said callously. “Failing that, he’s a personable lad–some kind lady is bound to take him in and treat him well.”

Untold is the sequel to Sarah Rees Brennan’s Unspoken. It’s a wonderful sophomore novel that I recently reread. I just finished the final book in this series after going through almost an entire box of tissue, I am not kidding. This excerpt features a rather facetious conversation between the protagonist Kami and her best friend Angela. Cover is linked to Goodreads.

Sorry-in-the-Vale has come under siege, with Rob Lynburn taking control of Aurimere and demanding the town offer him a sacrifice. To defeat him, Kami has become Ash’s source. In the aftermath of battle, Jared, the boy she’d been linked to her whole life, gave himself over to Rob to save Kami’s brother and his aunt. Unwilling to accept she’s lost Jared forever, Kami will do anything to get him back. With more people succumbing to Rob’s will, Kami is more desperate than ever to save her town. When Kami discovers a way to gain more power in order defeat Rob, she must decide how much she’s willing to give up, because defeating him may cost her everything.

“She lied to herself because she did not know how she would put herself back together if she fell apart.”

Unmade is the gripping conclusion to Sarah Rees Brennan’s Lynburn Legacy series. I’ve been holding on to this book for the past year because I wasn’t quite ready to say goodbye to this amazing series. Brennan is highly skilled when it comes to writing complex characters. It’s incredibly rewarding to see how each character has evolved over the course of three books, how small characters have become an intricate part of the story, and how characters you found off-putting have become ones you can’t help but like. Kami has come a long way since the beginning pages of Unspoken, when she was just a girl with an insatiable hunger for the truth and a drive that was infectious. Sacrifice has been an important theme throughout the series, and in this final book Kami must decide what she’s willing to give up in order to save the people she loves.

Jared is another character who has undergone a lot of changes, and his character development is perhaps the most rewarding. He’s always considered himself unworthy of being loved and struggled to connect with the members of his family when he’s always felt like an outsider among them. Throughout the course of the series, Jared has leaned to care about other people beside Kami, to see the value in others, and eventually finds his own worth apart from the girl who once defined his entire world. Brennan really knows how to let secondary characters shine. The people in Kami’s life are more than placeholders, they have real fears and desires; sometimes you agree with them and sometimes you don’t, but they are all incredibly well-developed. They exist on their own apart from the protagonist and I love seeing everyone interact with one another. From the wonderful friendship between Kami and Angela to the humorous interactions between Jon Glass and Lillian Lynburn, there’s something to love about any number of combination of characters.

My only real criticism for this final book is that these characters have been through so much, they’ve had to make sacrifices and lost people they loved, and I felt they deserved more than a chapter or two of happiness. Sarah Rees Brennan has an amazing ability to make you laugh and cry in the span of a single page, to make you smile and break your heart at the same time with this final book being no exception. I’ve enjoyed Kami’s journey immensely and am looking forward to Brennan’s future projects.

The Re-Read Challenge is hosted by Belle of the Literati and So Obsessed With. Wow, it’s been a while. I don’t know what happened, but when I first signed up for this challenge, I was so sure I would be able to reread a book every month, but there are just so many books, I don’t always get the time. Earlier in the month I picked up several two-star books and felt so disappointed. I wanted, no, I needed to pick up a book I knew I’d enjoy. This is when I reached for Sarah Rees Brennan’s Untold, the second book in the Lynburn Legacy series. What a breath of fresh air! This series is one of my very favorites and if you haven’t had the pleasure of reading this series, I highly recommend you do. Cover is linked to Goodreads. 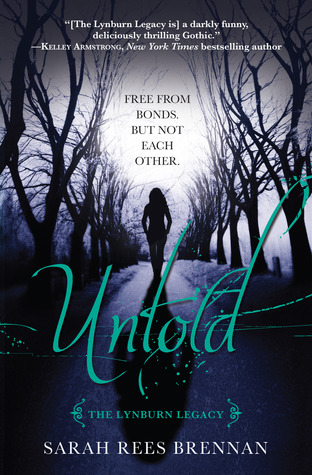 WHEN I First Read:
I read this in October of 2013, so it’s been a full two years.
WHAT I Remember:
This book ruined me, but in a good way. I remember being really emotional while reading it and being so scared to finish the series afterward.
WHY I Wanted to Re-Read:
I haven’t finished this series. The last book has been out since last year and I waited too long to pick it up, so I needed to reread the first two books.
HOW I Felt After Re-Reading:
I’m even more in love with these characters than I remember. Kami Glass is seriously one of my favorite protagonist ever. You can read my review of this one here. And if you are interested in finding out more about this series, my review for the first book Unspoken can be found here.
WOULD I Re-Read Again:
Heck yes, are you kidding me? Once I finally pick up the last book, there’s a good chance I’ll want to reread all three books again.

When the Lynburn family returned to Sorry-in-the-Vale after nearly two decades of absence, amateur journalist Kami Glass saw it as an opportunity to find out just what kind of secrets her cozy little town was hiding. She never expected to discover the imaginary friend she’d been hearing in her head all her life was real and that magic runs through the veins of Sorry-in-the-Vale. Now Rob Lynburn, a powerful sorcerer, is determined to take control of the town and resurrect a system of sacrifices in order to gain more power. Kami and her friends must find a way to stop him before more blood is spilled.

“The sorcerers were gone. The field of winter-dry grass was painted with slick red blood, the ground carved with dark lines and symbols cut deep into the earth, and in the blood and symbols lay the huddled shapes of dead animals.”

I reread Unspoken, the first book in Sarah Rees Brennan’s Lynburn Legacy series, at the end of July and finally got around to picking this second book up for a reread. Untold takes all of the fun elements of Unspoken and raises the stakes. Kami Glass is still one of my favorite protagonists. She continues to surprise those who’ve underestimated just how brave, tenacious, and resourceful she can be. The relationship between the characters are constantly developing and even though I’ve already read this one, the tension and anguish felt just as fresh as the first time. Characters like Jared Lynburn, who has a lot of messy thoughts about himself and whose behavior can sometimes be self-destructive, are the ones you root for the most throughout this series. In Unspoken his entire world seemed to revolve around Kami, the one person in his life he’d been able to count on, but in Untold, he learns to trust other people and I really liked seeing his relationship with his cousin Ash grow.

Brennan has a gift for writing flawed characters and she isn’t afraid to let them make mistakes. Even the adults, who sometimes play minuscule roles or are absent altogether in YA books, are given a chance to be human. They make mistakes, they don’t always know what to do, and sometimes their fear gets the best of them. Not only do we learn more about magic and the history of the Lynburns in this sequel, but minor characters like Rusty and Holly are given larger parts. I love the fact that not all the relationships in this book are made important by their proximity to the protagonist. Everyone has their own issues with one another. They have their own arcs, which makes every character important and enjoyable to read about.

Untold manages to be hilarious, witty, and heart-breaking. I’ve been avoiding the last book in the series because I don’t want to let go of these wonderful characters, but after finishing this one, I don’t think I can wait too much longer to find out what happens.