I have so many reviews in my drafts and since I am going to go on hiatus very soon, I am going to do my best to get as many as I can out before then. This week I am bringing you reviews of two of the hardest books I’ve ever read. Both deal with heavy subject matter and I literally had to take breaks while reading them. Both were incredible reads, but definitely approach these titles with a bit of caution. Take note of the trigger warnings before diving in and always take care of yourself.

Maika Moulite and Maritza Moulite’s sophomore novel, One of the Good Ones, gives an unforgettable look at how victims of police brutality are stripped of their humanity, held up as saints or criminals under media scrutiny and deemed worthy or unworthy of being mourned as a result. Kezi has her whole life ahead of her. Passionate about history and social justice, Kezi has made a name for herself online with her YouTube channel. But her life is cut short after she attends a protest and is taken into police custody. One of the Good Ones for the most part alternates between Kezi’s POV before her arrest and present day from her sister Happi’s perspective. Kezi is dealing with internet fame, falling in love for the first time, and hiding the fact that she is gay from her very religious parents. After her death, her family is thrust into the spotlight and while her parents and older sister have adapted to this, her younger sister Happi struggles to deal with their grief constantly being put on display for public consumption. I loved reading about the different dynamics between the three Smith sisters: Happi, Kezi, and Genny. They are all very different people and don’t always have seamless sisterly interactions. It was both heartbreaking to read about how much Happi regretted not knowing her sister as well as she should have before her passing, but there is also a sense of hope as she begins to learn more about who Kezi was. I won’t spoil the book, but there is a POV in the novel that felt so pertinent as the book explores who and who isn’t publicly mourned when it comes to police brutality. The book also features letters and narrative non-fiction, the latter of which really stood out to me. Like their debut Maika Moulite and Maritza Moulite utilize different mediums in One of the Good Ones, crafting a unique and unforgettable story that will undoubtedly stun readers.

Anna-Marie McLemore’s delivers their most emotionally-charged novel with The Mirror Season. Ciela is known as La Reina de las Nievas, gifted with the ability to read customers and know exactly what kind of pan dulce they need at her family’s pastelería. After she is sexually assaulted at a party, Ciela would like nothing more than to forget that night, but when the boy who was assaulted at the same party shows up at her school with only a vague memory of what happened, she is forced to relive events. The Mirror Season can be overwhelming at times as it recounts the aftermath of Ciela’s sexual assault, the continued trauma of seeing her perpetrators at school, and the turmoil of keeping the truth of what happened a secret. Her relationship with Lock becomes a double-edged sword. Their connection allows Ciela to talk about her sexual assault for the first time with someone who understands, but she is unable for Lock’s sake as well as her own to be entirely truthful. Ciela spends a lot of time lying to herself as a coping mechanism, dealing with misplaced guilt, and struggling to reconcile the person she was before the assault with the person she has become. Though her journey is heartbreaking, The Mirror Season is also about Ciela rediscovering the parts of herself she thought were lost for good, reclaiming these parts as her own, and standing up to her assailants. The Mirror Season is a difficult novel to get through, at times it will hurt, shock, infuriate you to read, but like Anna-Marie McLemore’s previous novels, the characters in this story are more than their trauma and their path to empowerment though not smooth still feels hopeful even in the midst of the wounds they endure.

I am so excited to bring you this “Christmassy” series. I had the idea one night when I couldn’t sleep and then I couldn’t get it out of my head. Every day for twelve days leading up to Christmas, I will be gifting you all with a recommendation of a book by a Latinx author, along with twelve reasons why you should pick it up. Hoping to have lots of fun with with series which I am not so subtly calling Twelve Days of…Latinx Book Recommendations. Simultaneously, I will also be posting a Christmas-inspired book photo of these recommendations on my Instagram, which you can check out here. Covers are linked to Goodreads. Feel free to sing this first part to yourself aloud.

♬On the first day of Christmas, my favorite Latinx blogger (Too presumptuous? We’re going to go with it.) gave to me, a recommendation for…♬

“When a school presentation goes very wrong, Alaine Beauparlant finds herself suspended, shipped off to Haiti and writing the report of a lifetime…
You might ask the obvious question: What do I, a seventeen-year-old Haitian American from Miami with way too little life experience, have to say about anything?
Actually, a lot.
Thanks to ‘the incident’ (don’t ask), I’m spending the next two months doing what my school is calling a ‘spring volunteer immersion project.’ It’s definitely no vacation. I’m toiling away under the ever-watchful eyes of Tati Estelle at her new nonprofit. And my lean-in queen of a mother is even here to make sure I do things right. Or she might just be lying low to dodge the media sharks after a much more public incident of her own…and to hide a rather devastating secret.
All things considered, there are some pretty nice perks…like flirting with Tati’s distractingly cute intern, getting actual face time with my mom and experiencing Haiti for the first time. I’m even exploring my family’s history—which happens to be loaded with betrayals, superstitions and possibly even a family curse.
You know, typical drama. But it’s nothing I can’t handle.”

The cover for Dear Haiti, Love Alaine by Maika and Maritza Moulite is so vibrant and I have the best feeling that I’m going to end up loving the protagonist. I’m really looking forward to the interesting mother-daughter dynamic in this one and absolutely love that this debut was written by sisters. Love all of these novels by Latinx authors where it feels like the MCs are finally coming home. Cover is linked to Goodreads. 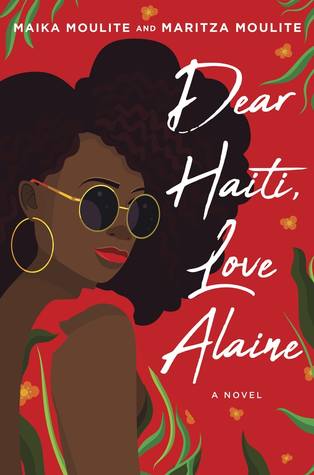 “Quick-witted high school journalist Alaine Beauparlant gets booted from her elite private school after an intricate prank goes cruelly awry. She warily accepts an invitation from her aunt to spend her suspension at the family’s estate in Haiti–where her estranged mom is recuperating from a political fiasco. In her homeland for the first time, Alaine is immediately put to work at her aunt’s start-up helping native children in need. Alaine meets locals, interacts with kids connected to donors, and is shown the ropes by Jason, a fellow intern whose charming ways are making work a bit more challenging. What she doesn’t expect to find are letters, articles, emails, and diary entries that she compiles into a final project that will not only save her academic standing in school, but also help her finally know the mother she’s never really understood.”