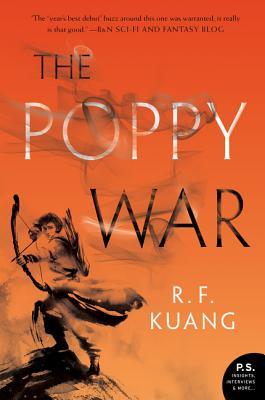 “It’s not like they can expel the entire class,” Kitay said. “I bet he’s testing us. Seeing if we really want to learn.”

“Or testing us to see how we’ll react around illegal drugs!” Venka shrilled.

Hello, it’s been a while since I posted a Friday 56, but I am hoping to join this meme again on a more regular basis. If I could described R.F. Kuang’s The Poppy War in one word it would be intense. This 56 is a far cry from where all these characters end up at the end of the novel. This series has been one of the most heart-wrenching fantasies I’ve ever read. I’m both excited and scared for the final book. Check out my review for this one here. My review for the second book will be going up this weekend. Cover is linked to Goodreads.

“A brilliantly imaginative talent makes her exciting debut with this epic historical military fantasy, inspired by the bloody history of China’s twentieth century and filled with treachery and magic, in the tradition of Ken Liu’s Grace of Kings and N.K. Jemisin’s Inheritance Trilogy.
When Rin aced the Keju—the Empire-wide test to find the most talented youth to learn at the Academies—it was a shock to everyone: to the test officials, who couldn’t believe a war orphan from Rooster Province could pass without cheating; to Rin’s guardians, who believed they’d finally be able to marry her off and further their criminal enterprise; and to Rin herself, who realized she was finally free of the servitude and despair that had made up her daily existence. That she got into Sinegard—the most elite military school in Nikan—was even more surprising.
But surprises aren’t always good.
Because being a dark-skinned peasant girl from the south is not an easy thing at Sinegard. Targeted from the outset by rival classmates for her color, poverty, and gender, Rin discovers she possesses a lethal, unearthly power—an aptitude for the nearly-mythical art of shamanism. Exploring the depths of her gift with the help of a seemingly insane teacher and psychoactive substances, Rin learns that gods long thought dead are very much alive—and that mastering control over those powers could mean more than just surviving school.
For while the Nikara Empire is at peace, the Federation of Mugen still lurks across a narrow sea. The militarily advanced Federation occupied Nikan for decades after the First Poppy War, and only barely lost the continent in the Second. And while most of the people are complacent to go about their lives, a few are aware that a Third Poppy War is just a spark away . . .
Rin’s shamanic powers may be the only way to save her people. But as she finds out more about the god that has chosen her, the vengeful Phoenix, she fears that winning the war may cost her humanity . . . and that it may already be too late. “

Her eyes landed on the ledger he’d been scribbling in. “She’s kept you busy, at least?”

“‘Busy’ is a word for it.” He slammed the ledger shut. “I’m working for one of the Empire’s most wanted criminals, and she’s got me doing her taxes.”

This week I am sharing an excerpt from my current read, The Dragon Republic by R.F. Kuang, sequel to The Poppy War. I just started this series this year and was blown away by the first novel. I am continually impressed by the sheer magnitude of the story and how the author has handle the topic of war in both books. Update: I just finished this book and it was emotionally devastating. This is my ghost typing. Cover is linked to Goodreads.

“In the aftermath of the Third Poppy War, shaman and warrior Rin is on the run: haunted by the atrocity she committed to end the war, addicted to opium, and hiding from the murderous commands of her vengeful god, the fiery Phoenix. Her only reason for living is to get revenge on the traitorous Empress who sold out Nikan to their enemies.
With no other options, Rin joins forces with the powerful Dragon Warlord, who has a plan to conquer Nikan, unseat the Empress, and create a new Republic. Rin throws herself into his war. After all, making war is all she knows how to do.
But the Empress is a more powerful foe than she appears, and the Dragon Warlord’s motivations are not as democratic as they seem. The more Rin learns, the more she fears her love for Nikan will drive her away from every ally and lead her to rely more and more on the Phoenix’s deadly power. Because there is nothing she won’t sacrifice for her country and her vengeance.
The sequel to R.F. Kuang’s acclaimed debut THE POPPY WAR, THE DRAGON REPUBLIC combines the history of 20th-century China with a gripping world of gods and monsters, to devastating effect.“