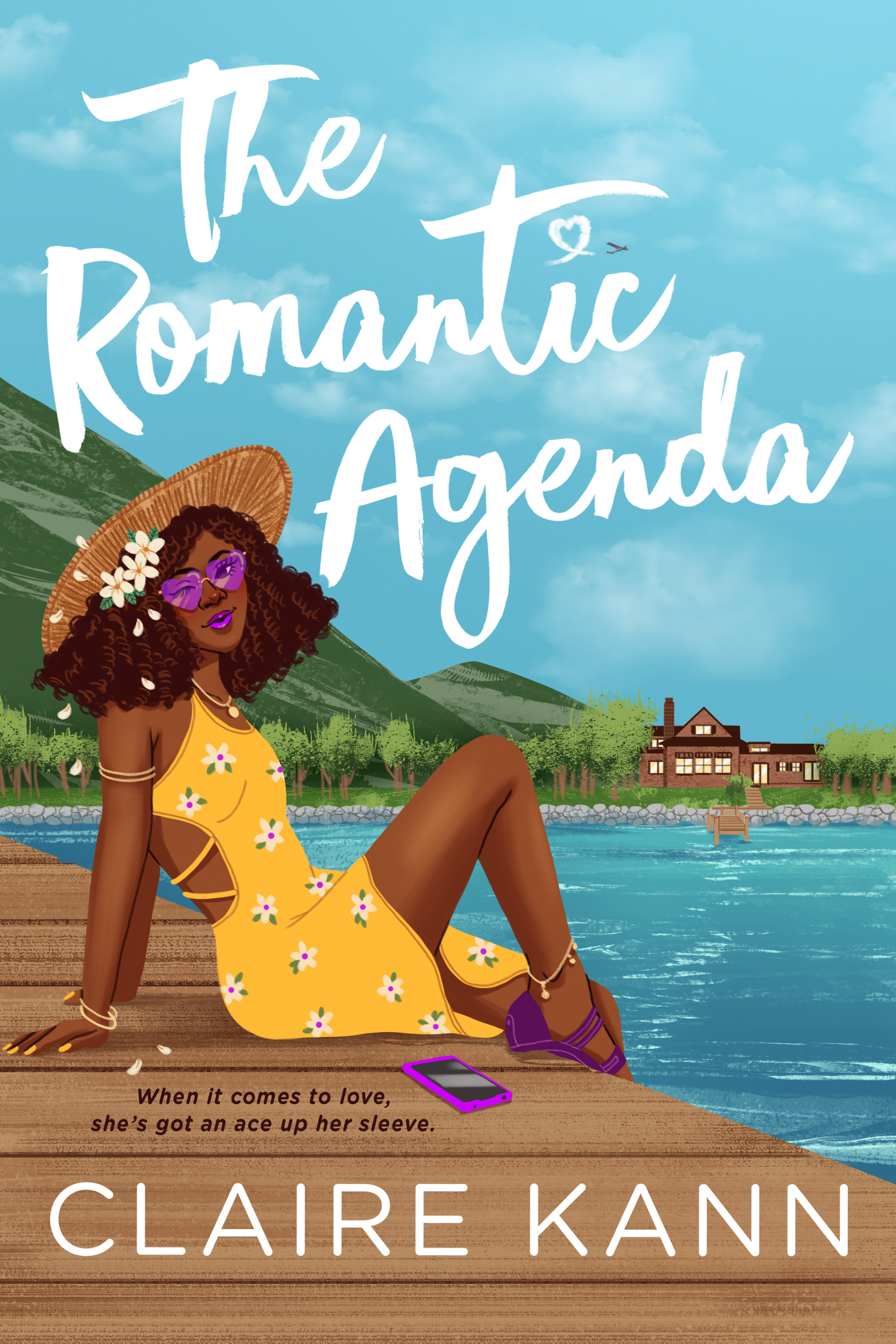 “Joy is in love with Malcolm.
But Malcolm really likes Summer.
Summer is in love with love.
And Fox is Summer’s ex-boyfriend.
Thirty, flirty, and asexual Joy is secretly in love with her best friend Malcolm, but she’s never been brave enough to say so. When he unexpectedly announces that he’s met the love of his life—and no, it’s not Joy—she’s heartbroken. Malcolm invites her on a weekend getaway, and Joy decides it’s her last chance to show him exactly what he’s overlooking. But maybe Joy is the one missing something…or someone…and his name is Fox.
Fox sees a kindred spirit in Joy—and decides to help her. He proposes they pretend to fall for each other on the weekend trip to make Malcolm jealous. But spending time with Fox shows Joy what it’s like to not be the third wheel, and there’s no mistaking the way he makes her feel. Could Fox be the romantic partner she’s always deserved?”

The Romantic Agenda, Claire Kann’s adult romance debut, is an absolute delight infused with both humor and hard lessons. Joy has been in love with her best friend, Malcolm, since they met in college. After years of unrequited love, Joy is finally ready to tell him how she really feels. Then he mentions Summer, who he swears may be the One. Torn between wanting to be supportive and getting her own shot at Malcolm’s heart, Joy agrees to accompany him, Summer, and Summer’s friend, Fox, on a weekend trip, where she is tasked with keeping the latter company. When Fox proposes that Joy and he pretend to start dating, it’s a win-win for them both. Malcolm will finally realize his true feelings for Joy and Fox will prevent Summer from ending up in another failed relationship. It’s a solid plan right up until Joy finds herself no longer pretending to like Fox’s company. When her interference begins to sow negative feelings between her and Malcolm, Joy is forced to confront some hard truths about their relationship.

Joy is charming and clever, who is always ready with a quick retort. She can be snarky and maybe a little petty, but is attentive and loving as well. She is also Black and asexual; these identities inform how she moves about the world. She is never not conscious of how she is seen by others. It doesn’t matter what she does, she is always judged unfairly. As a Black woman, she is overly sexualized and because she’s ace, she is expected to act a certain way and if she doesn’t, she is labeled a tease. Aside from her family, Malcolm has been one of her only constants. Because they are both asexual, Joy has always felt like he is one of the very few who can truly understand her. This mindset helped solidify this idea in her mind that Malcolm is the only one who could fill the part of her who longs for a romantic partner. She hasn’t allowed herself to entertain the idea that there could be someone else out there for her. If she did, she would have to open herself up to more people and that would also mean the possibility that no one else could possibly accept every part of her.

The Romantic Agenda introduces many complicated and messy relationships. Malcolm and Joy’s relationship has caused problems in the former’s romantic relationships before. It’s difficult for someone to look at them and not think there has to be something more than friendship there. In many ways, they are a little too codependent. They’ve spent so many years putting the other first that when someone else is introduced into the equation, this gives them pause. Joy is immediately defensive when it comes to Malcolm’s new love interest. To her, it’s just a matter of time before Summer forces Malcolm to choose between the two of them. Summer wants Malcolm to open up to her the way he does with Joy. All these characters have to figure out which parts of themselves they are willing to let others see and who they owe emotional intimacy to.

Joy’s relationship with Fox slowly begins to open her eyes to all the things she’s kept herself from. Fox and Joy both find the other to be an unexpected surprise. Joy is taken aback by how patient and insightful Fox can be. He comes off as grumpy and disinterested, but he is an incredible listener who always prioritized Joy’s feelings. For Fox, Joy is overwhelming at first. She is a shameless flirt who is always ready for a battle of wits. She is also incredibly thoughtful and her openness makes Fox want to lower his defenses. Their easy-going rapport is entertaining and adorable. I lived for every quick-witted exchange and melted in those quiet moments when they opened up to one another.

Claire Kann’s The Romantic Agenda radiates charm while also being heartfelt and moving, a  true pleasure from start to finish.

8 thoughts on “The Romantic Agenda by Claire Kann”