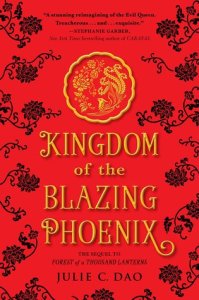 Title: Kingdom of the Blazing Phoenix
Author: Julie C. Dao
Series: Rise of the Empress, #2
Pages: 384
Publisher: Philomel Books
Release Date: November 6th 2018
*I received an ARC of this book from the publisher which does not influence my review*

“This fairy tale retelling lives in a mystical world inspired by the Far East, where the Dragon Lord and the Serpent God battle for control of the earthly realm; it is here that the flawed heroine of Forest of a Thousand Lanterns finally meets her match. An epic fantasy finale to the Rise of the Empress novels.
Princess Jade has grown up in exile, hidden away in a monastery while her stepmother, the ruthless Xifeng, rules as Empress of Feng Lu. But the empire is in distress and its people are sinking into poverty and despair. Even though Jade doesn’t want the crown, she knows she is the only one who can dethrone the Empress and set the world right. Ready to reclaim her place as rightful heir, Jade embarks on a quest to raise the Dragon Lords and defeat Xifeng and the Serpent God once and for all. But will the same darkness that took Xifeng take Jade, too? Or will she find the strength within to save herself, her friends, and her empire?
Set in an East Asian-inspired fantasy world filled with breathtaking pain and beauty, Kingdom of the Blazing Phoenix is filled with dazzling magic, powerful prose, and characters readers won’t soon forget.”

Julie C. Dao concludes her Rise of the Empress duology with Kingdom of the Blazing Phoenix. Filled with enchanting storytelling and a likable cast of characters, this companion novel is sure to please fans of the first book. In Forest of a Thousand Lanterns, readers witnessed the downfall of the protagonist Xifeng as she embraced the darkness within. In this follow-up novel, years have passed since Xifeng has become Empress. The empire has suffered under a cruel regime and many of the people have become restless. When Jade, the heir to the Empire, is summoned back home by her stepmother Xifeng, she discovers that evil can take many forms. Xifeng is not the doting wife and stepmother she pretends to be and when Jade uncovers the truth about how Xifeng has been able to hold on to power, she is forced to flee. In order to save her people and regain her rightful place as heir, Jade will have to journey far and overcome challenges meant to crush even the strongest of people.

Jade is just shy of eighteen years old. Having spent the majority of her life in a monastery, Jade’s understanding of the world has been limited. Though she has grown up far from the luxuries befitting her rank, her ignorance is a privilege in itself. Jade has always wanted to forget who she really is, to make vows and become a monk. When she arrives in the Imperial City and sees how much her people are suffering, she is forced to confront the world she’s spent her whole life hiding from. I loved that Jade’s journey isn’t just an outward one, that she must reflect on who she’s been and who she will choose to be. For people like Xifeng, who only see others as pawns in their own story, having friends and family is an easy way to be manipulated. For Jade, the allies she surrounds herself with become her greatest strength. From her surrogate grandmother Amah, who raised her when she was cast aside, to Amah’s granddaughter Wren, who exhibits a very different form of strength than Jade, these relationships are what keep Jade from being entice by the same kind of temptations that Xifeng has fallen prey to. The strongest influences in Jade’s life have always been women, including the mother she lost at such a young age and are the reason Jade, while not necessarily the strongest or bravest character, is able to challenge someone as powerful as Xifeng.

Xifeng is one of my favorite literary characters because she is allowed to want power for power’s sake. While I would never personally side with Xifeng, at the end of Forest of a Thousand Lanterns, I could not help but root for her just a little. The biggest challenge with this novel was shifting my own perspective. Seeing Xifeng not just as a ambitious young woman who did everything in her power to get what she wanted, but as an antagonist to Jade, a woman who took her mother’s place and who has continued to poison the people in order to hold on to power. One of my favorite elements of the novel was the importance of folktales. Jade grew up hearing Amah tell her stories and though she didn’t fully appreciate what Amah was trying to teach her, these tales become the building blocks of Jade’s journey.

If you’re looking for a unique take on fairytale retellings, Julie C. Dao’s Rise of the Empress duology is a must. She’s written a vibrant world with characters you can both love and love to hate.

16 thoughts on “ARC Review: Kingdom of the Blazing Phoenix by Julie C. Dao” 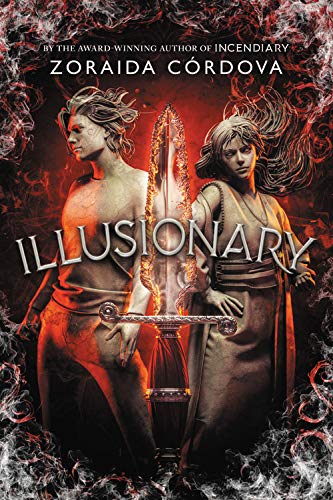