Title: Seafire
Author: Natalie C. Parker
Series: Seafire, #1
Pages: 384
Publisher: Razorbill
Release Date: August 28th 2018
*I received a copy of this book from the publisher, which does not influence my review*

“After her family is killed by corrupt warlord Aric Athair and his bloodthirsty army of Bullets, Caledonia Styx is left to chart her own course on the dangerous and deadly seas. She captains her ship, the Mors Navis, with a crew of girls and women just like her, whose lives have been turned upside down by Aric and his men. The crew has one misson: stay alive, and take down Aric’s armed and armored fleet.
But when Caledonia’s best friend and second-in-command just barely survives an attack thanks to help from a Bullet looking to defect, Caledonia finds herself questioning whether or not to let him join their crew. Is this boy the key to taking down Aric Athair once and for all…or will he threaten everything the women of the Mors Navis have worked for?”

Natalie C. Parker delivers an action-packed, exhilarating opener to her new series with Seafire. This female-focused novel packs a punch with non-stop action and an ensemble that is irresistible. Caledonia Styx lost her entire family four years ago when a ship controlled by the tyrannical Aric Athair attacked theirs. Now Caledonia, along with Pisces, the only other survivor of the Ghost, have forged a new kind of family for themselves. Sailing the Mors Navis, the all-female crew of 53 have made it their mission to thwart Athair every chance they get. Caledonia dreams of the day when she can finally avenge her family and take him down for good. When Caledonia and her crew come face to face with a Bullet, one of Athair’s soldiers, looking to get out from under his thumb, she must decide if trusting him is worth the risk.

The highlight of Seafire is of course Caledonia and her female crew. They’re fierce, brave and tenacious. I loved how well they all work together and that no one outshines another. They each have their individual strengths and as long as they are dedicated to doing their job, they work like a well-oiled machine. Parker does a fine job of flushing out several of her minor characters. Hime was a particularly fascinating character. The crew of the Mors Navis rescued her from Aric Athair and knows the lengths the tyrant has gone to to keep control of his soldiers, drugging them into submission. Most of the crew are very protective of Hime, but I loved how much fight was in her. Caledonia often regards Hime as either a liability, because of her former addiction to Silt, Aric Athair’s drug of choice, or inexpendable, because she functions as a medic on the ship. Hime, however, wants a chance to fight and as the story progresses, it becomes clear how much the crew needs her. I was also drawn to Pisces, who functions as a foil to Caledonia for much of the novel. Empathy and mercy come much easier to her than her captain. As first mate, it’s Pisces’s job to have Caledonia’s back, but also to know when her authority needs to be challenged. I loved that Pisces has a very different way of looking at the world as her perspective is essential for everyone looking to take down Athair and usher in a new kind of world.

Seafire is as much about its protagonist’s strengths as it is about her weaknesses. Caledonia was forced to grow up at a young age, not only because of the world she grew up in, but because of who she chose to become when her family was murdered. She has built a different kind of family for herself with her crew and most of her decisions are based on keeping them safe. However, Caledonia is not used to being vulnerable and tends to see the world in black and white. Her uncompromising views and hard shell have kept her and her crew alive, but has also made it difficult for her to get out of her own way. Caledonia’s own show of mercy led to her family’s demise and so she has vowed to never show mercy to a Bullet again. She’s spent so much time feeding her hatred of Aric Athair and his Bullets that she’s forgotten that at one point these soldiers were victims. Athair has built his army by demanding the people he rules over sacrifice their sons and daughters to his cause. I questioned many of Caledonia’s choices, but they were all true to her character and they never made me question her resolve.

Though labeled a fantasy, Natalie C. Parker’s Seafire reads more like a dystopian/post-apocalyptic novel. There are hints of what the world used to be and technology that only makes sense to a setting where civilization had once flourished. I loved exploring this world and look forward to learning more. Seafire is an easy novel to fall in love with and is refreshingly driven by a strong sense of family, both the one the characters are born into and the one they built for themselves. 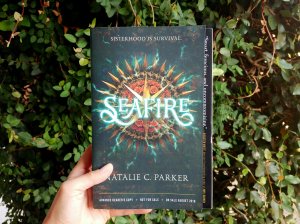 GIVEAWAY: I’m giving away my ARC of Seafire by Natalie C. Parker on Twitter. Click the image to the left to be directed to the tweet. US only. Ends 8/16, so be sure to RT/F soon. I want to get this into the winner’s hands as soon as possible.