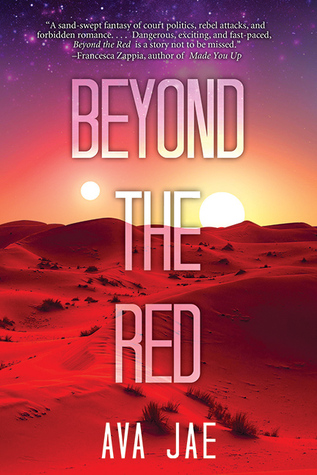 “Alien queen Kora has a problem as vast as the endless crimson deserts. She’s the first female ruler of her territory in generations, but her people are rioting and call for her violent younger twin brother to take the throne. Despite assassination attempts, a mounting uprising of nomadic human rebels, and pressure to find a mate to help her rule, she’s determined to protect her people from her brother’s would-be tyrannical rule.
Eros is a rebel soldier hated by aliens and human alike for being a half-blood. But that doesn’t stop him from defending his people—at least until Kora’s soldiers raze his camp and take him captive. He is given an ultimatum: be an enslaved bodyguard to Kora, or be executed for his true identity—a secret kept even from him.
When Kora and Eros are framed for the attempted assassination of her betrothed, they flee. Their only chance of survival is to turn themselves in to the high court, where revealing Eros’s secret could mean a swift public execution. But when they uncover a violent plot to end the human insurgency, they must find a way to work together to prevent genocide.”

“A scream rips from my throat, but by the time the soldier turns and sees me, it’s too late–I slam my dagger into his neck. He drops, gurgling as I rip the blade away, whirling on the second soldier and catching him in the throat.”

Ava Jae’s Beyond the Red feels more like a decent setup to an interesting series than a compelling opening installment. The human race is barely surviving, but its greatest enemy is not the dry, hot desert in which they dwell, but the Sepharon, an alien race that regards humanity as invaders. Eros has been raised among humans, but as much as he would like to be a part of their race, nothing erases the fact that he should not exist. As a “half-blood,” Eros is an offspring of a Sepharon and human, considered an abomination to both races. When Eros’s people are attacked by Sepharon soldiers, he finds himself taken captive and thrust into the Sepharon queen’s court. Kora is young and inexperienced. Though the throne is her birthright, many believe her brother Dima is better suited. With threats at every turn and no one in her own ranks she can truly trust, Kora is forced to turn to Eros to protect her. Each needs the other to survive, but their arrangement is a fragile thing.

Beyond the Red has some excellent building blocks for solid world building. I was immediately taken in by this alien world, from the red, hot desert sands to the gleaming white architecture of Vejla city. There’s also an interesting political dynamic with Kora and her brother, as the people riot for a different ruler and Dima tries everything he can to undermine his sister. There’s a larger power structure beyond the kingdom of Eljan, but the novel only just touches on this. The Sepharon people have a really interesting religion that I was hoping to learn more about as well. Beyond the Red started off really strong with its world building, but dropped off in the middle when the focus narrowed to Eros and Kora’s growing relationship and much of these interesting aspects got left behind.

I wanted to believe in the connection between these two characters, but I found that their interest in each other began way too quickly. Eros’s immediate attraction to Kora left me cringing, not just because Eros is a servant, but because Kora’s actions resulted in Eros losing many people he loved. Although it’s acknowledged that Kora is responsible for the actions of her soldiers, I didn’t think that this instantaneous attraction was really necessary in order for me to get behind their relationship. It wasn’t until the end of the book that I felt invested in the two of them and much of this had to do with the fact that it finally felt like they had an actual foundation to build on.

As far as their individual character arcs are concerned, I was hoping for more for Kora. She’s a queen after all and it made me so mad to see her brother circumvent her authority at every turn. I wanted her to gain the kind of confidence she needed in order to lead, but this never really happened. Eros’s story was actually much more interesting. I can’t say too much because of spoilers, but the ending really got me excited for the direction this story is headed.

14 thoughts on “Beyond the Red by Ava Jae”