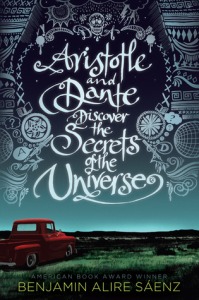 “Aristotle is an angry teen with a brother in prison. Dante is a know-it-all who has an unusual way of looking at the world. When the two meet at the swimming pool, they seem to have nothing in common. But as the loners start spending time together, they discover that they share a special friendship—the kind that changes lives and lasts a lifetime. And it is through this friendship that Ari and Dante will learn the most important truths about themselves and the kind of people they want to be.“

Benjamin Alire Sáenz’s Aristotle and Dante Discover the Secrets of the Universe is compelling coming-of-age story, infused with both touching and tragic moments in the life of Aristotle “Ari” Mendoza. The summer of Ari’s fifteenth year, he meets Dante and while the two could not be any more different, they quickly become friends. Over the course of two summers, both their lives are irrevocably changed by this friendship. This is the very first audio book I’ve listened to and although I was apprehensive about whether or not it would be able to hold my attention, I could not ask for a better narrator than Lin-Manuel Miranda. In fact, I might have been spoiled and need every audiobook I listen to to be narrated by him.

I loved how important family was in this book, not just for Ari but for Dante as well. Much of Ari’s resentment toward his parents comes from how closed off they are around him and this is never more apparent than with regard to his older brother, Bernardo, who is currently incarcerated. Ari wants so badly to know why, to be able to utter his brother’s name, but there’s a lot of hurt and shame that keeps both his parents tight-lipped. Ari’s father is also a veteran who continues to deal with the psychological effects of war. Ari is desperate to know his father, to have a real honest conversation, but this isn’t always possible for his dad. There is so much to love about Dante’s parents and it’s obvious right off the bat that they are meant to be a contrast to Ari’s. Dante’s father shows more affection in one interaction with his son than Ari has ever witnessed from his father. I thought it was still really important that Dante still finds it hard to open up to his parents. When he is contemplating telling them he is gay, he confesses to Ari that he doesn’t want to be a disappointment.

From the very beginning it’s clear that Dante is more sure of himself. He’s curious about the world and himself and isn’t afraid to share his feelings about both. He’s one of those people who lights up a room and his optimism is infectious. Ari’s feelings for Dante are gradual. Unlike Dante, he isn’t so sure of himself. He has a lot of internal dialogue that can be messy, contradictory, and evasive. He hides behind a lot of sardonic comments, but there’s so much happening underneath the surface, you can’t help but feel the weight he carries around. Of course, there were still times when I wanted to slap him upside the head to knock some sense into him. Ari feels more for Dante than he’s willing to admit, but still has to deal with his own internalized homophobia before being able to label what his relationship with Dante really is.

Both Ari and Dante are Mexican American and I found it really interesting and insightful how the characters deal with their ethnic identities. Dante never feels quite “Mexican” enough and is often convinced that other Mexicans don’t like him because of it. Ari makes snide remarks about what it means to be Mexican, even going so far as to say he’s more Mexican than Dante because of his darker skin. When you grow up in a society that stereotypes your culture and places less value on you because of your background, it can really do a number on how you perceive yourself, not just your place in society, but your place within that group. These stereotypes are often perpetuated within the community and I’ve known plenty of Mexican Americans that feel not quite American and not quite Mexican either and it’s a hard line to walk. That being said, I do wish the characters had come to a resolution regarding their identities or at least had a continued discussion about this part of who they are.

Sáenz does a fine job of capturing the pain and uncertainty of growing up when you’re on the brink of adulthood. Ari’s journey of self-discovery is incredibly moving and will have you rooting for him till the end.