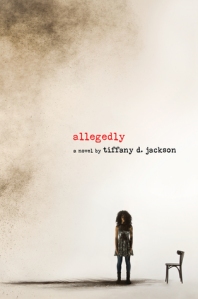 “Mary B. Addison killed a baby.
Allegedly. She didn’t say much in that first interview with detectives, and the media filled in the only blanks that mattered: A white baby had died while under the care of a church-going black woman and her nine-year-old daughter. The public convicted Mary and the jury made it official. But did she do it? She wouldn’t say.
Mary survived six years in baby jail before being dumped in a group home. The house isn’t really “home”—no place where you fear for your life can be considered a home. Home is Ted, who she meets on assignment at a nursing home.
There wasn’t a point to setting the record straight before, but now she’s got Ted—and their unborn child—to think about. When the state threatens to take her baby, Mary must find the voice to fight her past. And her fate lies in the hands of the one person she distrusts the most: her Momma. No one knows the real Momma. But who really knows the real Mary?”

“I’m dizzy from holding my breath for so long, maybe for years. And something ugly, hidden deep inside me is threatening to erupt. I can’t hold it back anymore. How do I make it stop before it’s too late?“

Tiffany D. Jackson’s Allegedly is one of the strongest debuts I’ve ever read. Mary B. Addison’s life is run by the state. Convicted of manslaughter at age nine, Mary has been in the system for nearly seven years. The group home she currently resides in is a living nightmare. The adults she is surrounded by are apathetic at best and the other girls in the group home can be ruthless and cruel. Mary just tries her best to survive, but when she discovers she is pregnant, she has more than herself to worry about. Mary wants to keep her baby, but with the kind of conviction she has on her record, Mary will be lucky to even hold her baby before its taken away. In order for her to even have a chance to raise her own child, Mary must confront her past and speak up when so many have wished to silence her.

Mary’s story is both compelling and heartbreaking. Mary is adamant about her innocence, but she’s also torn between telling the truth and condemning the one person in her life she’s always felt protective of: her mother. The author does an incredible job of holding the reader’s attention, not only by using Mary’s appeal to overturn her case to push the story forward, but also by weaving in excerpts from interviews and various officials’ notes in order to give a clearer picture of Mary’s past. With the entire system stacked against her, it isn’t hard to root for Mary, to hope that she could somehow have a happy ending. But there are instances when Mary’s credibility is brought into question. It isn’t that she is necessarily lying, but that she isn’t telling the whole truth. What happened the night little Alyssa died is shrouded in mystery and while I wanted to hear the whole story from Mary sooner, it was the secrecy and uncertainty of that night that kept me reading.

The most interesting and powerful relationship in Allegedly is Mary’s complicated dynamic with her mother. Though Mary has been through a lifetime of pain, she’s still in many ways very young. Her emotional age is never more apparent than when discussing her mother. Though she blames her mother for what happened to Alyssa, she still wants to protect her. She still worries about her mother’s mental health when she isn’t around, whether she’s been taking her pills and if she’s been having as her mother phrases it “a day.” She wishes more than anything to be able to talk to her mother when it comes to her pregnancy, but her mother remains antagonistic toward the very idea, so Mary remains very much isolated. Mary is starved for motherly love, but is also understandably distrustful of strangers. For her, it isn’t a matter of if the people in her life will disappoint her, but a matter of when.

Allegedly examines minors in the justice system, systemic racism, mental illness, teen pregnancy, and a myriad of other important topics. Jackson has crafted an amazing debut that is both moving and thought-provoking and one that I will not soon forget.