There’s something about summer that just screams mini reviews. I have a feeling that I’ll be doing a few of these over the next few months. It’s just a really convenient way to share a few thoughts on books that I’m unable to provide full reviews for and relieves me of that stress that sometimes accompanies me trying to write a full review (is this only me?). Covers below are linked to Goodreads.

“Sierra Santiago was looking forward to a fun summer of making art, hanging out with her friends, and skating around Brooklyn. But then a weird zombie guy crashes the first party of the season. Sierra’s near-comatose abuelo begins to say “No importa” over and over. And when the graffiti murals in Bed-Stuy start to weep…. Well, something stranger than the usual New York mayhem is going on.
Sierra soon discovers a supernatural order called the Shadowshapers, who connect with spirits via paintings, music, and stories. Her grandfather once shared the order’s secrets with an anthropologist, Dr. Jonathan Wick, who turned the Caribbean magic to his own foul ends. Now Wick wants to become the ultimate Shadowshaper by killing all the others, one by one. With the help of her friends and the hot graffiti artist Robbie, Sierra must dodge Wick’s supernatural creations, harness her own Shadowshaping abilities, and save her family’s past, present, and future.”

“But tonight there wasn’t time for solace or peaceful momenta in nature. Someone — something — was after her. It knew her name. It had found her once and probably could again.“

There aren’t many urban fantasy books that pique my interest. I’m not sure what it is about the genre that doesn’t really appeal to me, but every once in a while, I like to give one a try. Daniel José Older’s Shadowshaper sounded truly unique and I’m always looking for more diverse reads. Afro-Latinos are a group I rarely see written about or represented in the media, so this was such a refreshing book. I really loved how Older combined fantasy elements with the protagonist’s artistic talents. Family plays a huge role in Sierra’s life and these are the relationships I always see suffer in contemporary settings. I also loved that the romantic interest in this novel was not the clichéd arrogant, too-perfect-to-be-true hot guy. Robbie is sweet and shy; and it was great to see that the romance did not overshadow Sierra’s relationship with her friends. 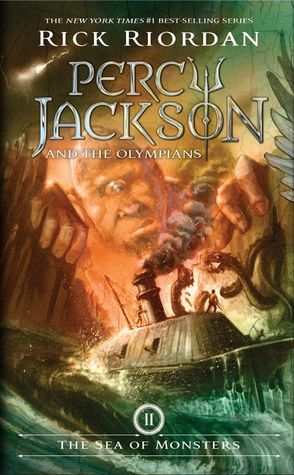 “The heroic son of Poseidon makes an action-packed comeback in the second must-read installment of Rick Riordan’s amazing young readers series. Starring Percy Jackson, a “half blood” whose mother is human and whose father is the God of the Sea, Riordan’s series combines cliffhanger adventure and Greek mythology lessons that results in true page-turners that get better with each installment. In this episode, The Sea of Monsters, Percy sets out to retrieve the Golden Fleece before his summer camp is destroyed, surpassing the first book’s drama and setting the stage for more thrills to come.“

“Bull Number Two turned to face me, fire sputtering from the gash I’d cut in its side. I couldn’t tell if it felt any pain, but its ruby eyes seemed to glare at me like I’d just made things personal.“

This is only my second Rick Riordan book. I know, I know, it’s hard to believe that I’ve never read through the Percy Jackson series before. But I am slowly making my way through them and that is all that should matter. This second book really endeared Percy to me. His relationship with Tyson was a major highlight for me, it showed just how openhearted Percy is while still staying true to how complicated it is being the son of a god. I love how important friendship has been in this series so far. I feel like I got to know Annabeth better in this one and am looking forward to her growth as a character. The book ended with a shocking event that had me wanting to reach for the third book right away. What does this mean?! Overall, it was a good follow-up to the first Percy Jackson novel.

15 thoughts on “Mini Reviews: Shadowshaper + The Sea of Monsters”