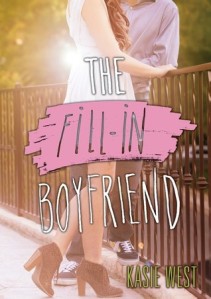 Gia has just been dumped in the parking lot right outside her prom. To make matters worse, her friends have never believed her boyfriend Bradley ever existed. Desperate to prove to them she hasn’t been lying, Gia enlists the help of a stranger to play the part of her fill-in boyfriend. When the night ends, Gia is sure she’s gotten away with a little white lie, but when the fake Bradley’s sister insists she return the favor to her brother, Gia’s life gets a little more complicated, especially when she begins to develop feelings for him. Gia’s web of lies starts to unravel with the return of her ex and when the girl who’s always been out to get her becomes convinced Gia is hiding something.

“At the end of the night you get to break up with me. In front of my friends, preferably. Try not to make a big show of it. Then, like the real Bradley, you can walk away forever and this will be over.”

Kasie West’s The Fill-In Boyfriend, though a bit predictable in its concept, is a fun read for those looking for something light. Gia Montgomery believes her life is pretty much perfect. She’s popular, has great friends, and is dating a hot college guy. But appearances can be deceiving and Gia discovers that her life, her relationships, and who she is is pretty shallow. Her fake relationship brings to light issues she never realized she had with her parents, her ex-boyfriend, her friends, and even herself. I loved seeing Gia go from a girl so preoccupied with how things looked to one who wanted to be a better person, who was no longer satisfied with a shallow idea of happiness.

My least favorite part of the novel were Gia’s supposed friends. Claire and Laney are Gia’s oldest friends, but Jules, the new face in the group, seems to downright hate Gia. She is the one that convinces the others that Gia is making up having a boyfriend. Gia, in turn, feels obligated to lie because Jules undermines her at every turn. While I understand there would be no story without Gia’s friends doubting her, I do wish there was more of an explanation for why they would side with the obviously petty Jules. Gia develops a great relationship with her fill-in boyfriend’s sister, Bec. On the surface, Gia and Bec do not seem like the type of girls who would be friends, but the latter challenges the protagonist and has her questioning what kind of person she is and what kind of person she wants to be. I also appreciated that Gia isn’t the only one to discover things about herself, her love interest also has his own character arc.

The Fill-In Boyfriend is a quick, enjoyable read. The open-ended conclusion is very realistic and while it takes time to warm up to Gia, I found her overall growth as a person gratifying.

7 thoughts on “The Fill-In Boyfriend by Kasie West”