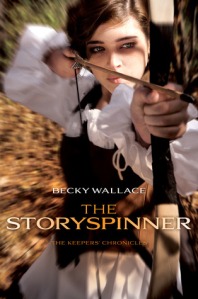 In a land forgotten by many, the Keepers’ worst fears are coming true. The barrier that separates their land, Olinda, from the violent magic-free people of Santarem is weakening. Their only hope is to travel across the boundary and find the lost princess to the Wilhelm throne, the only one who can unite Santarem and strengthen the wall between the two lands. But they are not the only ones who seek her, someone else also has their eye on the throne and is willing to kill every young woman they suspect may be the heir.

Johanna Van Arlo hails from a talented family of Performers, a traveling troupe who specialize in entertaining the masses. It is the only life she has ever known, but when an accident takes the life of her father and her family is expelled from the group, Johanna must find a way to help her family survive even if it means working for the arrogant Lord Rafael DeSilva. The more Johanna performs, the more attention she receives, attention that may put her very life in danger.

“No amount of training prepared a man for the hot spray of an enemy’s blood across his knuckles, or the horrible gulping whine of a partially severed windpipe.”

Becky Wallace’s The Storyspinner has a notable array of characters and points of view. Unfortunately, this sometimes worked against the story. Although told in third person, the book shuffles through seven different perspectives, though two characters’ POV make only one appearance. The story is split between two sets of characters who eventually converge: the group seeking the lost princess and Johanna and her story. While the plot is laid out very clearly for one set, it felt like the other set had to play catch up when they finally did meet. Unfortunately, I found myself liking one storyline more than the other.

Johanna struggles with pride and necessity. Her love for her family, especially her younger brothers, is the only reason she agrees to work for Rafi, the young Lord who has also just lost his father. Despite her best efforts and perhaps also do to the rather unfortunate way they meet, Johanna is convinced that Rafi looks down on her, and she is determined to prove him wrong. Rafi, on the other hand, has been forced to step into his father’s shoes. He’s inexperienced and convinced he’ll never be the leader his people need him to be. I loved Rafi’s relationship with his mother, the Lady DeSilva, whom he respects and defers to regularly. He trusts her experiences more than his own and in many ways feels that she should be the one to lead.

Jacaré, the High Captain of the Elite Guard, has taken it into his own hands to find the missing princess. Along with him is his sister Pira, the young and inexperienced Leão, and his wise mentor Texugo. These characters’ history is largely unexplored, so I had a hard time understanding why certain relationships develop like they do. Olinda, the land these magic-wielders hail from, is a bit of a mystery to me as well. We are told they have a negative view of Santarem and the truth about the war between the two groups has been distorted, but I never had a good grasp on this world and as a result, felt like the characters were less developed.

I struggle to rate this one because although there are some elements I didn’t like, there were some I really loved. And while most three-star reviews for a series opener would mean it’d be unlikely that I’d pick up the sequel, I’m too invested in Johanna and Rafi’s story to not find out what happens next. I’m hoping that because the characters have finally converged, that the sequel will improve upon the first.

3 thoughts on “The Storyspinner by Becky Wallace”