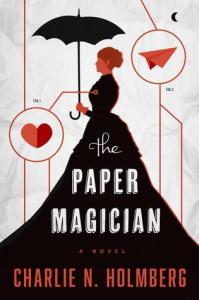 Nothing could make Ceony Twill, recent graduate of Tagis Praff School for the Magically Inclined, happier than to become a Smelter, a magician able to manipulate metal. But all her dreams are dashed away when she is informed that she will study under Magician Thane, a Folder, skilled in the art of paper. Ceony cannot believe her bad luck, but with little choice, she accepts the apprenticeship. Mg. Thane turns out to be very flighty and odd, but also thoughtful. When she and her teacher are attacked by an Excisioner, a wielder of dark magic, who steals Mg. Thane’s heart, Ceony must gather her courage and retrieve his heart before it is too late.

“To her amazement, snow began to fall. Paper snowflakes cascaded through the air, some as small as Ceony’s thumbnail, some as large as her hand. Hundreds of them poured down as the paper ceiling gave way, all somehow timed just right so that they fell like real snow.”

Having requested to read this book mostly based on the charming cover, I wasn’t sure what to expect from Charlie N. Holmberg’s The Paper Magician, but I found myself utterly enchanted by the world of paper magic Ceony is introduced to. Animals crafted with paper come to life and words written in books leap from the pages. I haven’t read a world quite like this one and this coupled with likable characters makes this book a real winner.

Ceony, ambitious and curious, is a perfect blend of resourceful heroine and naive student. While most of the book explores Mg. Thane’s past, we get these moments of vulnerability from Ceony, which I hope are explored more in the sequel. Both she and her teacher have more layers than either of them put forth. I am enamored with Magician Emery Thane. As the story unfolds (pun intended) the magician is revealed to be so much more than the man with a mischievous personality. His past comes back to haunt him, a past he never intended to share with Ceony, so I am curious to see how this effects their relationship in the next book.

The only downside to this book is that it all ended too quickly and now I’m seriously considering purchasing it and its sequel right now.

16 thoughts on “The Paper Magician by Charlie N. Holmberg”