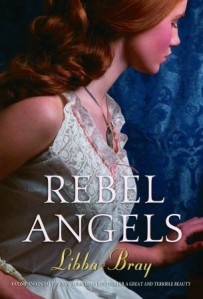 Though Gemma was able to thwart Circe’s plans in A Great and Terrible Beauty, she inadvertently set free the power of the realms. In so doing, it has becomes possible for anyone to use its power. Now Gemma and her friends must find the mysterious Temple and bind the magic before Circe finds a way in. But Circe is not the only one who desires this power, the Rakshana want to control it as well and will use Kartik to fool Gemma into turning over the power to them. Inside the realms, more enemies than friends emerge and what was once a sanctuary has now become a battleground for the girls.

“Felicity’s whispering something to me but I can’t hear the words. The whisper itself has a horrible din, like the dry wings and scratching legs of a thousand insects. My eyelids flutter. A roaring fills my ears, and I am falling hard and fast through a tunnel of light and sound. Time stretches out like a band. I am caught in the grip of a vision. But this is like no vision I’ve ever had. It is much more powerful.”

Gemma, Ann, and Felicity are once again in the midst of a dangerous game. The difference between these three is this: though Gemma finds possessing the power of the realms to be frightening, the other two only see what they can obtain from it. I think Felicity has a much more complicated need for power than Ann, and in this way I felt Felicity’s character is more fully realized. I also felt that she and Gemma grew more as characters than the insecure Ann, in whom I am still waiting to see more fight. The tension between Gemma and Felicity continues and is further strained by the family secrets they try to keep from one another.

Libba Bray’s second novel in her Gemma Doyle trilogy focuses more on the land found in the realms. In Rebel Angels we meet the strange and sometimes dark inhabitants of this magical place. There are also the sad spirits now trapped here who are unable to cross over, including the girls’ friend Pippa. Pippa may be the most dangerous of all these creatures, for she embodies all the beauty of Pippa and the guilt Gemma feels for having left her, but behind her eyes Pippa is different and not entirely the girl they remember.

Though the battle for power may take place in the realms, the girls are still fighting battles in the real world. Ann continues to struggle with the anonymity of being an orphan, Felicity is consistently trying to get her mother’s attention, and Gemma, as she is being courted by the beguiling Simon Middleton, begins to glimpse a normal life but it may cost her who she really is in order to obtain it. It soon becomes clear that there is no fantasy to be had in the real world. Though the power of the realms the girls are able to carry back with them has the ability to change things, it is only temporary, an illusion and in the end no magic can remedy reality’s problems.