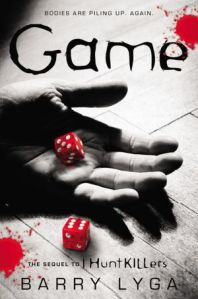 Jasper Dent hasn’t quite gotten over the nightmare that was his life a few months ago when a serial killer decided to make his town of Lobo’s Nob his playground and replicate his murders after the notorious Billy Dent, who isn’t just any serial killer, he’s Jazz’s father. Billy Dent knows how to play people and he played Jazz, pulling his most impressive feat yet: escaping from prison.

Jazz knows that it’s only a matter of time before his father seeks out his son. When a detective from New York shows up asking for Jazz’s help solving the Hat-Dog murders, Jazz is reluctant but eventually accepts that the only way he can prove he isn’t like his father is to hunt down those who are. Unbeknownst to Jazz is that Billy is also in New York and news of his son’s arrival makes him very happy.

“Livin’ another day is what it’s all about, Jasper, m’boy, ’cause every day we live is another chance to kill.”

Game, Barry Lyga’s second book in his Jasper Dent series, is at times gruesome and unapologetically candid. This may be a YA book, but it does not shy away from the repulsiveness of its own topic. I wouldn’t recommend this book to anyone who is squeamish.

Jazz continues to doubt himself and this bleeds into his relationship with her girlfriend Connie. In this book we see much more of Billy’s influence as Jazz’s thoughts sometimes take on the persona of his father, which at times can be extremely disturbing. I have a great affection for Jazz, but if I’m honest he sometimes worries me. Most of what we learn of Billy Dent is because of Jazz’s make-believe conversations with him, which probably doesn’t bode well for the mental health of our protagonist.

I was so happy to see that this book zeroed in on Jazz’s girlfriend Connie. She has a much more intimate look at Jazz and less convoluted perspective of him than Jazz himself. She has so much faith in her boyfriend, but like me she has those little moments of doubt or times when Jazz’s behavior gives her pause. As the story progressed, I couldn’t decide whether the girl was brave or reckless, but it’s probably both. What I didn’t like is that a few characters seem to suffer from a bit of stupidity and while I understand this lack of sense is used to build tension (and boy, I felt the tension), it can sometimes compromise the intellect of the characters.

What did I learn from Game? Here’s a list.

Rules To Live By When Dealing With A Serial Killer:

(1) If you’re ever contacted by one, call the police immediately.

(3) Never go anywhere by yourself.

(4) Never let anyone leave you by yourself.

(5) Never, under any circumstances, accept an invitation from a serial killer to join a Game.

5 thoughts on “Game by Barry Lyga”