*Find any sentence (or a few, just don’t spoil it) that grab you.

*Add your (url) post here in Linky. Add the post url, not your blog url. It’s that simple. 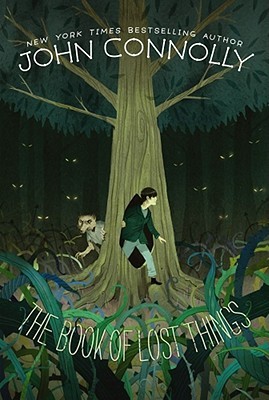 The Germans had struck hard at London the day before. At one point, according to David’s father, there had been a thousand aircraft battling over the Isle of Sheppey. David wondered what London looked like now. Was it filled with burned-out buildings, with rubble where streets used to be? Were the pigeons still in Trafalgar Square?

John Connolly’s The Book of Lost Things is a story of fairy tales come to life and a boy trying to find his way home.

“Young David’s mother has just passed away after being sick for a long time. Believing he is partially responsible, David finds it difficult to let go of the guilt. When his father begins a relationship with another woman, David feels his father pulling away, especially when he announces there is a baby on the way. When they move into a new house, David retreats into the books his mother and he cherished together. Soon David begins to hear mysterious voices and begins to see a strange figure lurking in the shadows, a Crooked Man. And then he hears his mother’s voice calling for help and he finds himself in another world where fairy tale creatures are real and far more deadly than the storybooks suggest.” You can find my full review here.