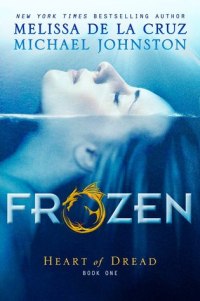 Confession: I did not finish this book. I held on for as long as I could, enduring bad plot lines, stale characters, and dreadful dialogue. Finally, I gave up and am glad to be rid of it. Melissa de la Cruz is a well-known YA author and if this book is any indication of her writing, I won’t be picking up any of her books despite their popularity.

Frozen revolves around Nat, a blackjack dealer in New Vegas, whose secret forces her to leave the city in search of a utopian land known as the Blue. I really have no idea how to explain this world because the authors fail to give a clear context to it. Think snow and cold temperatures, think bombs going off for really no good clear reason, think individuals with special abilities who are outcasts. It’s a lot easier to think of these things when given an explanation for them, but it’s all very murky and messy.

Helping Nat traverse across the snowy wasteland is Wes, a former Marine Sergeant and seasoned mercenary. All this I am supposed to believe despite his age and personality…if I can even say he has one. A little sample of Nat’s love interest’s thoughts:

I almost stopped reading after this line and in retrospect, I probably should have done just that. Both Nat and Wes are inexplicably occupied with each other at the most inconvenient of times and their whole relationship feels contrived and shallow.

Strange jumps and quick transitions are used to hurry the story along, but details are glazed over. This neglect is the reason the authors fail to bring this world to life. The action is too abrupt, both in origin and conclusion. As a result whenever another bomb explodes or another confrontation happens, you’re left wondering what the point was. A lot happens in this book and it has no real purpose but to make this world seem more exciting or more dangerous, but it fails to do either.

Frozen is simply a chaotic mess.